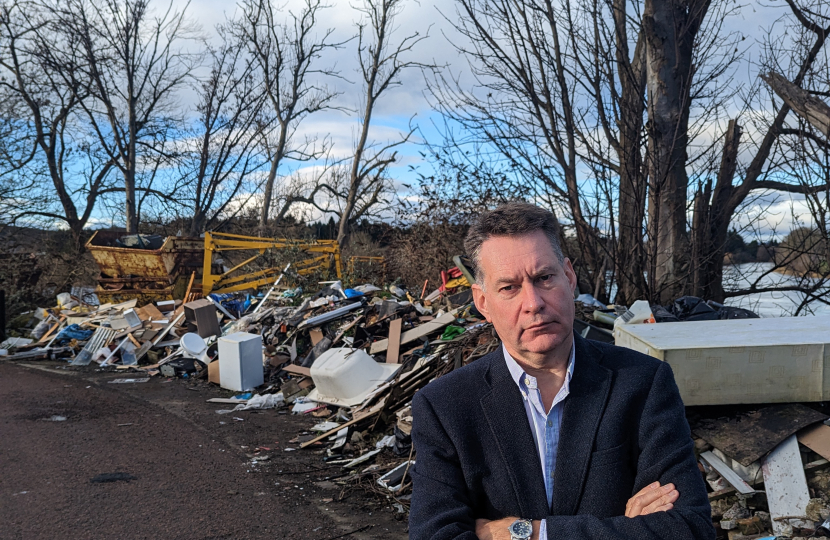 Murdo has called for “horrific” fly-tipping which has been dumped on the banks of the River Tay to be removed.

He said he was “shocked” to find out there is an unsightly fly-tipping spot near the Friarton Bridge, on the outskirts of Perth. The fly-tipping, which covers several square meters beside the River Tay, includes several disused vehicles, bits of wood, a fridge and mattress.

The issue is one that Murdo hopes to be dealt with by a change in the legislation. His Members’ Bill on Fly-tipping has gained the requisite cross-party support from MSPs, and it would update current legislation on fly-tipping, which dates back to 1990.

The Bill seeks to improve current laws on fly-tipping, including substantially increasingly penalties for those responsible.

Commenting, Murdo Fraser MSP said: “The amount of rubbish dumped at this site just outside Perth is just horrific. It ranges from various disused vehicles, bits of wood, old paint containers, to a mattress and a fridge. It is totally unacceptable for this to happen and I was very concerned that due to the location of the fly-tipping being on the banks of the River Tay there could well be a significant environmental risk.

“As a result, I contacted SEPA (Scottish Environment Protection Agency) to ask if they were aware of the fly-tipping, and if so, what can be done to deal with the issue.

“We need action to clear this unsightly mess up as it is an eyesore.”

Murdo added: “Although SEPA has said their officers visited the site several times last year, they state they have been unable to trace the source of any recent waste or identify potential offenders. And Perth and Kinross Council have said that the site is on private land.

“We need to see much higher penalties on those responsible for fly-tipping to help deter this anti-social behaviour and avoid a repeat of this elsewhere.”